On the eve of the Feast of St Valentine, where people across the European continent and beyond show their affection to their loved ones and closest friends, a giant greeting card has been sent from citizens in the UK to the European Parliament in Strasbourg.

The Valentine’s Day card is a project run by EU Flag Mafia, with the support of pro-EU grassroots groups across the UK, and has been signed by well over a thousand Brits in just a few days. Despite the UK no longer being a member of the European Union, supporters of the project wished to demonstrate that there is still a huge support here for the EU and its ideals, and that many millions of British citizens still feel European at heart.

Collecting many hundreds of digital signatures and handwritten messages in a small space of time, the project has created a large physical card, running to over a dozen pages, it was recieved by Terry Reintke and other MEPs 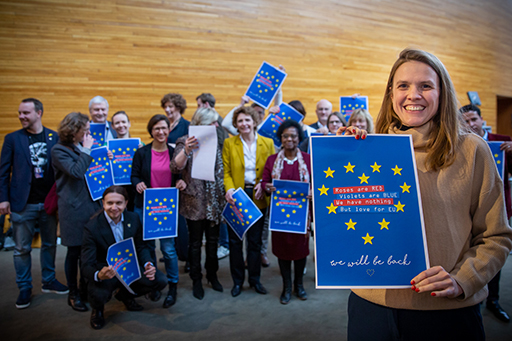 EU Flag Mafia is a grassroots pro-EU group which aims to create public awareness of the benefits of a continued and close relationship between the UK and the EU and organises events and actions aimed at promoting European identity across the UK. Previous activity has included the handing out hundreds of thousands of EU flags and decorated berets at Last Night of The Proms concerts for the last four years, and in every country of the UK.